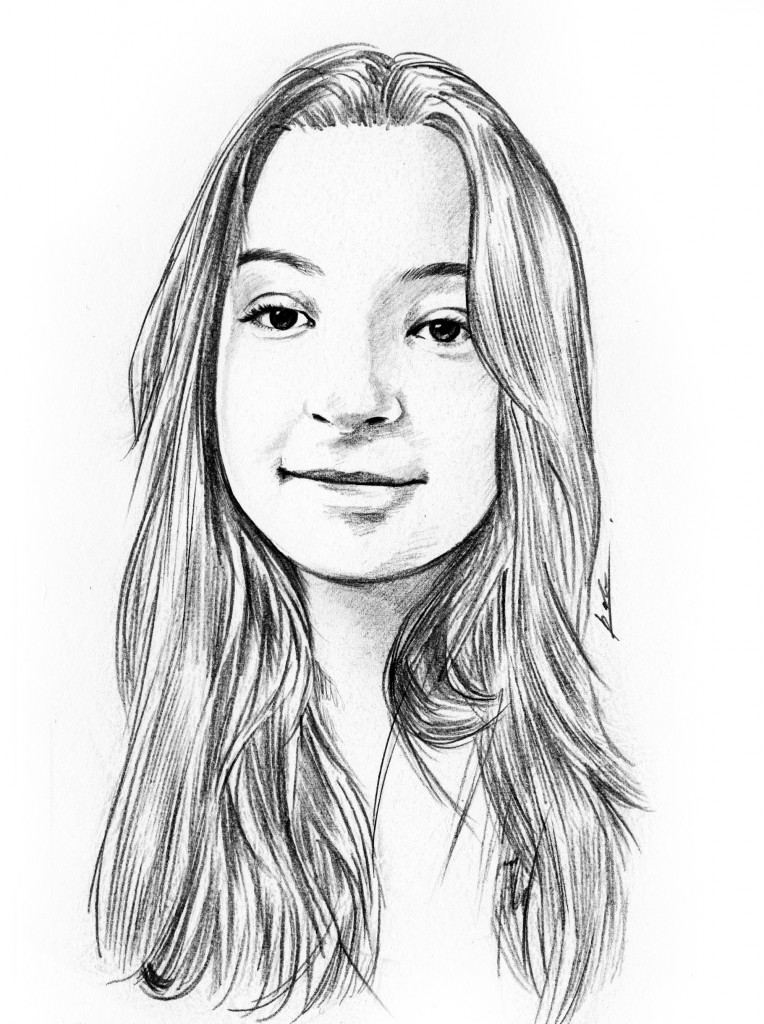 Is STD really that big of a deal?
Are you sexually active? Have you ever thought of getting tested before and after sexual activities?
It is no secret that young adults are more vulnerable for spreading Sexually Transmissible Diseases (STD), than the rest of the sexually active society. Freshly graduated students are finally free from their parent’s grip and are stepping into the “adult life”. University students, like you and me are suddenly pushed into the adult world and expected to adopt a proper attitude.
Sounds familiar, no?

But are we really that properly prepared for the student life? And are we really aware of the consequences of unprotected sex? A recent study conducted in Europe revealed incredibly high rates of various STD percentages within the age range of 18- 25 (1, 2) (Figure 1). This may be the confirmation that we might not be that well informed about the dangers of unprotected sex. 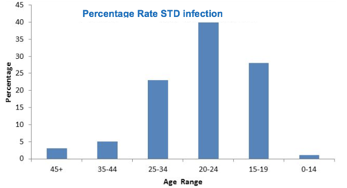 The tree that hides the forest
Multiple studies have investigated the awareness of STDs in universities, demonstrating that most of the students have heard about STD, like HIV or HPV, however, without really understanding the importance of protecting themselves from it nor the consequences of it (3). We usually don’t see the whole maze behind the word STD, as plenty of sexual diseases aren’t mentioned during our education.

To be able to inform ourselves better, we have to know what we are fighting against. The top 3 most common STDs in Europe are: Chlamydia, HIV and Gonorrhea (Figure 2) (1) 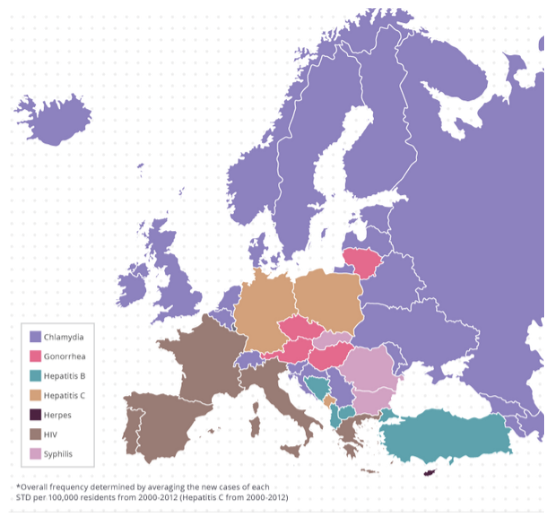 Chlamydia the silent beast?
Never heard of Chlamydia? You should!
Chlamydia is the most commonly diagnosed STD in Europe (Netherlands), affecting women and men between the age of 15-24 (7). It is an infection that is caused by a bacterium (known as Chlamydia trachomatis).
Chlamydia is difficult to detect, as it usually doesn’t show any early symptoms. Symptoms take weeks to appear. The symptoms that do appear include irritation while urinating, discharge from male and female genitals or pain / swelling of testicles. Chlamydia may affect the whole pelvic area of the female reproduction system (uterus, fallopian tube and ovaries) causing infertility (1, 5).
A worldwide prevalence and incidence study (2012) reported that females were twice as more susceptible to be infected by Chlamydia than men (Table 1) (6).

HIV
The human immunodeficiency virus or AIDS is a potential life-threatening disease, which is caused by a lentivirus. An infected person will experience a gradual failure of its immune system. This will lead to an exposure to other infections and viruses, causing considerable co-morbidity and/or death (8-10).
The infected person will not experience any symptoms at the early stage of the HIV. After a while, the infection will gradually lead to a deficient immune system, which leaves the door wide open for other infections (such as tuberculosis). In advanced stages of HIV, the infected person will experience heavy weight loss due to influenza-like symptoms (diarrhea, nausea and high fever) (8, 9).
Compared to the rest of Europe, the Netherlands has a middle-to-low rate of HIV infected population (6.1 per 100,000) (1). Within the HIV infected population in the Netherlands, the highest prevalence can be observed from age groups ranging from 20 to 54 years old (Figure 4) (8). 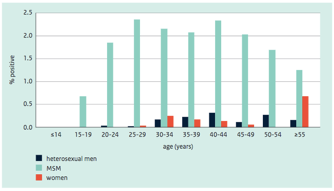 Figure 4: Percentage of heterosexual men, homosexual men and women with HIV in the Netherlands by age: From (8)

HIV can be transmitted via direct sexual contact with infected partner(s), transfusion of contaminated blood or from mother to child transmission during pregnancy. To prevent HIV contamination, condoms must be used during sexual contact (8, 10). It is very important to get tested before and/or after any sexual intercourse. This doesn’t take much energy and may save your life!
It is not to be underestimated, as looking 30 years back, this disease was equal to death. As, nowadays HIV can be contained with medicines, people tend to minimize HIV and see it as a banal STD. This results in an enhanced reckless sexual behavior. People have lost sight of the importance of avoiding this disease at all cost.

The old pal Gonorrhea
Gonorrhea has been present in Europe since the medieval times. Although a decrease of prevalence in the age group from 15-24 years old can be seen. There is an increase in the prevalence in the age group from 25- 45+ years old. This ancient sexual infection is caused by Neisseria gonorrhoeae bacteria. Like Chlamydia, Gonorrhea is curable and is often doesn’t show any symptoms. When symptoms do arise, they are comparable with Chlamydia infections. Gonorrhea differs from Chlamydia because the former can affect the joints or heart valves in untreated carriers (11).
Gonorrhea is spread via unprotected sexual contact, as well as from mother to child transmission during pregnancy. Using the condoms during sexual intercourse can prevent the infection from being transmitted to others (7, 11).

The take-home message
The prevalence of most STDs infecting young adults remains unchanged over the years. Despite all the knowledge that has been acquired throughout the years, STDs are still massively present in our society. Students are not educated enough. Schools should prioritize sexual education more. Preventing the spread of STD is very simple!
What is even more surprising is how little studies are investigate young adult’s sexual behaviors and how this affects the persistence of STDs.
In conclusion, European students are not well informed on how to prevent STDs and what the consequences of those various STDs are. Sexual education should be prioritized before students get to be independent from their parents and enter “the adult world”.
Stay safe and get tested!